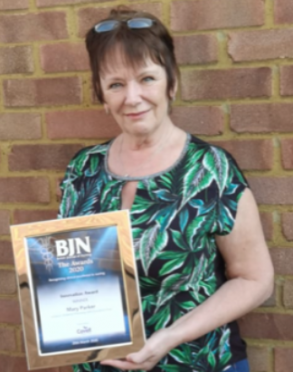 Mary Parker, Health Lead, Inclusion, Midlands Partnership NHS Foundation Trust has been recognised by the British Journal of Nursing (BJN) Awards for her work towards achieving micro-elimination of Hepatitis C and has now won their national award for Innovation.

The BJN Awards are a showcase of nursing excellence, highlighting the critical contribution that nurses make to healthcare. They represent a fantastic opportunity to gain the recognition that hard work and dedication so richly deserves, and a chance to commemorate achievement in the nursing profession.

Mary was judged as the winning entry in the Innovation category which is for nurses who have developed a genuinely innovative approach to nurse-led care within their area of practice.

Mary works as a Non-Medical Prescriber with One Recovery Bucks (ORB) community substance misuse team across Buckinghamshire.  They recognised that the vast majority of their patients with the Hepatitis C Virus (HCV) were not accessing treatment through the traditional treatment pathway via their GP. This was largely because of their chaotic lifestyle and fear of discrimination. In partnership with colleagues and the local healthcare trust, Mary helped to develop and lead a new direct treatment pathway, aimed at simplifying treatment and encouraging participation.  The improved pathway significantly reduced both the number of tests patients had to complete and the number of appointments they were required to attend; all of which were kept in-house at two of their sites in Aylesbury and High Wycombe.  The service also established regular clinics so that patients could meet with the Consultant Hepatologist at their service in the community.

Since 2016, treatment uptake has significantly increased from 18% to over 95% and the service is now able to achieve micro-elimination; which the World Health Organisation highlight is a key step towards total elimination of viral hepatitis by 2030. Micro-elimination refers to eliminating the virus in defined segments of the population to gradually achieve national elimination.

In nominating Mary, her manager Tracy Braddock said, “The resounding success of this pathway has wholly been achieved by our Health-Lead, Mary, working in partnership with the Consultant Hepatologist from our local NHS trust”.

Mary added “Our hard to reach and marginalised patients previously struggled to access their treatment through the traditional pathway. It wasn’t because they didn’t want treatment – they did!  Our pathway has clearly made that achievable for them.  I was delighted to have been shortlisted in the final three for this prestigious award earlier this year, but to then be judged as the winner out of all the other amazing entries was truly humbling. ”

Mary and the One Recovery Bucks team have also been recognised for their work towards HepC micro-elimination by High Wycombe MP Steve Baker who has nominated them for an NHS Parliamentary Award.