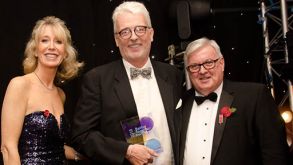 Professor Elliott, who is based at The Redwoods Centre in Shrewsbury, qualified from Birmingham Medical School then completed a Master’s degree in Health Care Management prior to becoming a Consultant Old Age Psychiatrist in Shropshire in 1995 and then the Trust’s Clinical Director in 1996.

Under his leadership, dementia community services provided by the Trust were rated excellent by the CQC.

Professor Elliott also led the significant reduction of inpatient beds with the move of resources to community-based services. This included an overall doubling of community staff and increase in Consultant Psychiatrists from 3 to 6.

Professor Elliott was elected a Fellow of the Royal College of Psychiatrists in 2003 and became Professor of Old Age Psychiatry in 2005.

Nationally, he is the Clinical Advisor for Old Age Psychiatry to the Parliamentary and Health Service Ombudsman and a Special Visitor to the Office of the Public Guardian.

After stepping down as Clinical Director in February this year, he was appointed as Chair of the Sustainability and Transformation Partnership for Shropshire and Telford and Wrekin, overseeing the development of mental health services into the future.

Therèsa Moyes, Director of Quality and Clinical Performance at MPFT commented: “He is a natural leader with a passion for improving the quality of services in a measurable way. During his career with the Trust, he has led and supported a number of initiatives that have not only resulted in improved clinical care for patients but have seen all members of the multidisciplinary team grow in confidence and competence when assessing dementia and memory related problems. Professor Elliott constantly moves forward bringing colleagues with him to ensure patients receive the best and most up to date care possible."

Midlands Partnership’s Better Together Awards are designed to recognise exceptional contributions to service, by individuals and teams, by clinical and non clinical staff. Over 165 nominations were received for eight competitive awards and following a rigorous process, supported by some of the Trust’s Governor Members and service users, the best entries were shortlisted, only finding out if they were winners on the night. Two lifetime achievement awards were also made by the Executive Directors of the Trust.

380 local NHS staff attended the event, held on 8 November 2018 at the Staffordshire County Showground, which is also an important opportunity for sharing good practice and helping staff to understand their role in the wider service. Midlands Partnership NHS Foundation Trust provides physical and mental health, learning disability and adult social care services across Staffordshire, Stoke-on-Trent and Shropshire, but also psychological therapies; drug and alcohol services in prisons; and care for serving MOD personnel across the country.

Neil Carr, Chief Executive said: “One of the Trust’s core objectives is to make this a fantastic place to work where staff feel positive and proud to be part of the organisation. We know that we cannot deliver effective services without well trained and supported staff and believe that offering real recognition in the form of this awards ceremony has a real part to play in creating an enthusiastic, committed and confident workforce.”